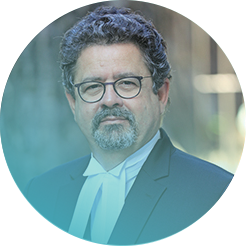 Following in the footsteps of his father, Sir Victor, Gavin Glover was a State Scholar in 1980 and read Jurisprudence as the Anderson Scholar at Balliol College, Oxford University. He was called to the Bar of England and Wales at the Honourable Society of the Middle Temple in 1985, and joined the Mauritian Bar the same year.

He started his own practice in 1985; he acted as part time Prosecuting Counsel from 1987 to 1990. In 2003, he was appointed a member of the Steering Committee on the Liberalisation of the Legal Profession. Mr. Glover was an active member of the Mauritius Bar Association where he successively occupied the functions of Treasurer in 2000 and 2001, Secretary in 2002 and President in 2003. Mr. Glover took silk in June 2010.

He is presently the Head of Chambers and is one of the top litigators on the island with a wide range of clientele. He also advises a number of local and international companies in Mauritius. He is an accredited arbitrator of the MCCI Arbitration and Mediation Center.