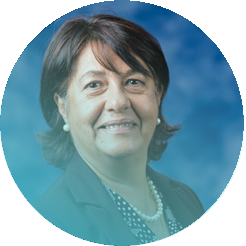 MARY ANNE holds a “Maitrise en droit” from University of Aix Marseilles.
Mary Anne has prior to exercising as an Attorney at Law been the in house Lawyer of the former BNPI Group in Mauritius

Mary Anne has chaired the American Chamber of Commerce Mauritius consecutive years between 2008 and 2011.
From 2005 to 2015 Mary Anne has been a Board Member and later Vice Chair of the Financial Services Commission Mauritius.

Mary Anne has been sworn in as an Attorney in 1996 – her areas of practice are inter alia: Family Law, Law of Contracts, Bankruptcy Law and Company Law, Intellectual Property Law, Civil Law, Insurance and Banking Law.