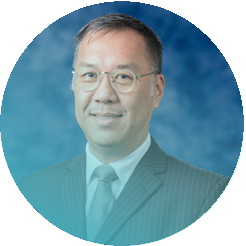 After reading law at the University of Buckingham in England from 1991 to 1993, he did a Maîtrise en Droit Privé at the Université Paris II, France in 1993. He passed the Attorney examinations with the Council of Legal Education in Mauritius in 1994 and sworn in as an Attorney in November 1995.

He started his practice in partnership with Georges Ng Wong Hing, Senior Attorney up to date. He sat as a member of the Council of the University of Mauritius from December 2011 to December 2013. Over the years, he has acquired experience over a wide range of extra judicial works.

His practice is mainly based on litigation works in the field of banking law, family law, commercial and company law and property law catering for local and foreign clientèle. He presented himself for the first time in 2018 for the election to become a member of the Council of the Mauritius Law Society and was elected. He is now holding the post of Secretary for the Council of the Mauritius Law Society.